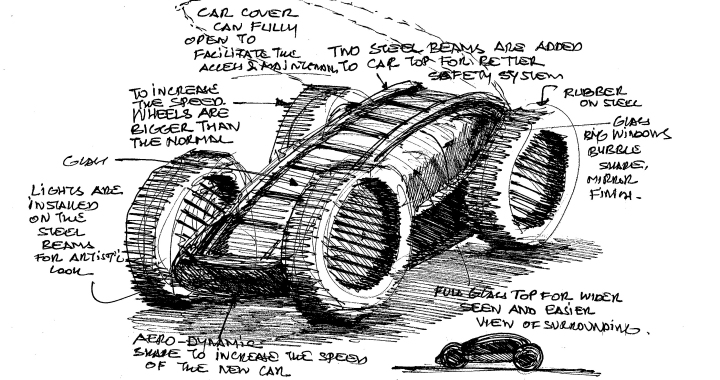 Start with a Good Podcast

One of my favorite podcasts is called 99% Invisible. It’s about design, and no, not the fundamentalist Bible thumping kind of ‘design,’ but the design of objects and buildings in the world around us. Designers seem to be a special breed, caught somewhere between the obsessions of an engineer with function and an artist with beauty. Together these qualities come together to make pens that fit comfortably in the hand and are pleasant to look at, chairs that are comfortable and blend with their environment, buildings and public spaces that make you feel good, homey and warm, or small and awed.

There’s a passage in Rebbe Nachman of Breslov’s writings that I’ve always found puzzling. In the parshah of Vayishlach when Yaakov is returning from his exile and his brother Esav is coming to meet him, the text (Genesis 32:35) states that Yaakov ‘was left’ or ‘went back’ over the river by himself. Rashi, the great commentator says that he went back for some ‘small vessels,’ he had left behind. This Rashi is the point of departure for a statement of Rebbe Nachman that “For a Tzaddik (wholly righteous person) their possessions are as dear to them as their bodies.”

But aren’t righteous people supposed to put less emphasis on things like possessions and physicality? Aren’t they supposed to be more focused on spiritual matters? There is a midrash on the story of creation when G-d says, ‘Let us make man,’ that the us is referring to human beings, that we are being brought in as partners in creation. Just as G-d creates the world, so too we are given the power of creation. And as opposed to some popular beliefs about spirituality both from the East and the West, Judaism positively exalts in physicality as a spiritual exercise. Instead of pushing away the physical to engage the spiritual, our tradition calls on us to engage the physical to draw out the spiritual.

Design as a Spiritual Exercise

And finally coming back to design. G-d is the great designer of the world. He created (through whatever process you like), a world full of beautiful, useful things for us to use. He created fecund soil and nourishing rain, broad vistas and crowded forests, mountains and plains, snow and sand, a baby’s cry and the wrinkles of a well worn smile. And so we are called upon to make and care for, on the level we can, objects that will serve a spiritual purpose. Not only ‘Judaica,’ like mezuzot and menorahs, but the chairs and tables that serve as a sanctuary during prayer and the altar for our daily meals, the steps that we climb unthinkingly on our way to serve G-d, and more, and more.

When I listen to 99% invisible, and get into the mindset of a designer, I feel inspired to see everything in the world from a divine perspective. What helps you get into that ‘G-dly’ perspective?