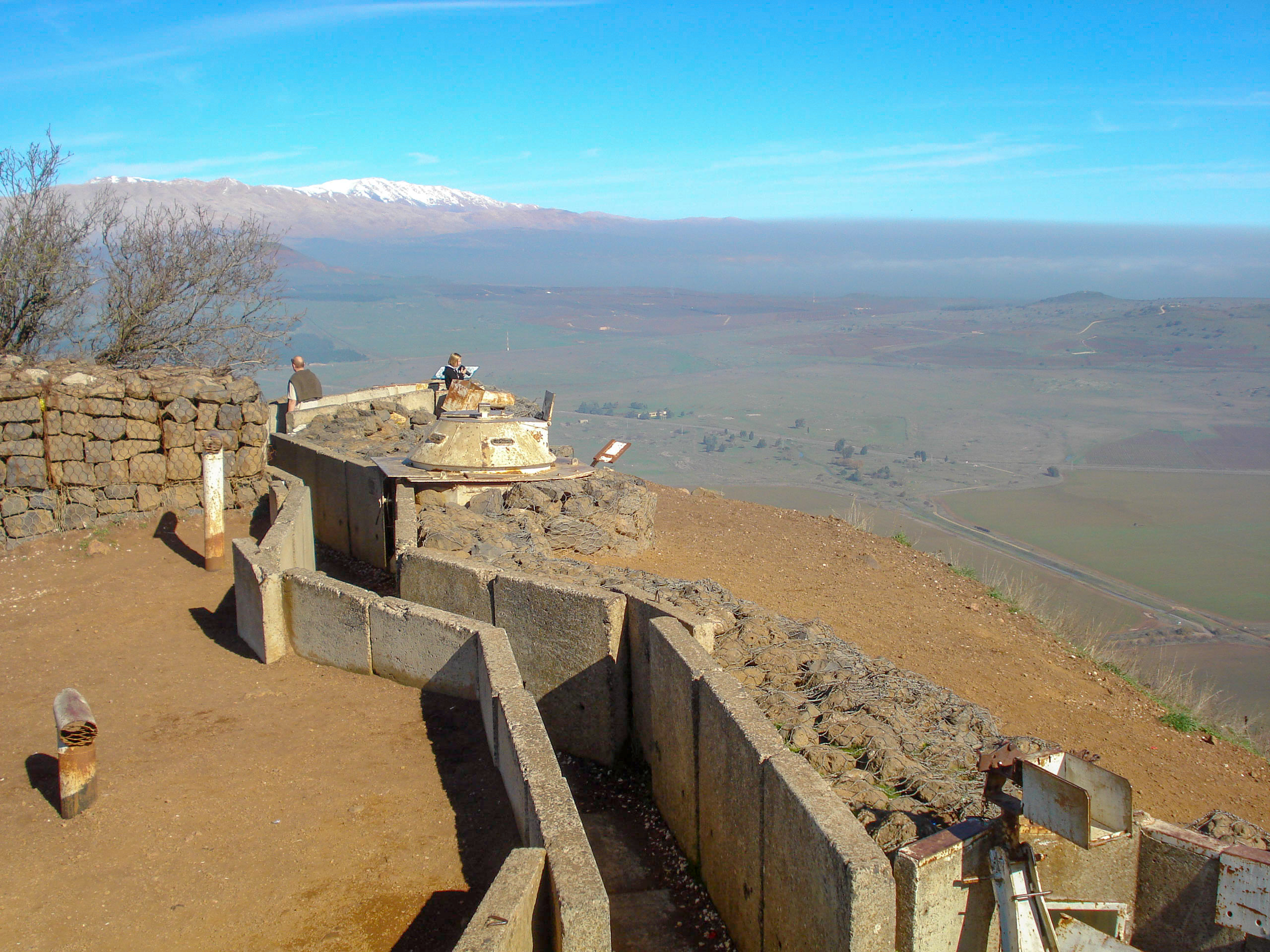 What and Where are the Golan Heights?

The Golan Heights are not really a distinct area, but rather a small piece of the Syrian plateau which towers over the north-east part of Israel, which was conquered by Israel in 1967. The line of small mountains rising out of the plateau, including Mt. Bental, are the place chosen as the new, militarily defensible, border with Syria at the end of the Six Day War.

Bental was originally a Syrian army bunker, later an Israeli bunker, and finally decommissioned and turned into a tourist site. But the mountain itself is not the point of a visit there. The reason to make this hill part of your itinerary in northern Israel is the view.

I Think I Can See My House from Here!

From the top of Mt. Bental one looks out to the east about half the distance to Damascus. You can see the Demilitarized Zone, patrolled by UN troops since shortly after the 1967 Six Day War, and both the Israeli and Syrian sides of the border. Quneitra was a syrian town that ended up in the DMZ, and as such was relocated. One can see ‘New’ Quneitra in the distance. Until recently, for the last few years, one could often hear mortar fire in Quneitra from various rebel groups fighting over territory street by street. You can also see the Hermon mountain, Israel’s tallest mountain and home to our only ski area.

But What Makes it Really Special?

In the plain immediately below, between the Israeli border and where one stands on Mt. Bental, we look down on the ‘Valley of Tears,’ site of the largest tank battle in world history, outside of World War II. On the morning of Yom Kippur 1973, a small group of Israeli tankists woke up to a seemingly endless line of Syrian tanks headed toward them. In the end there would be over 1,000 Syrian tanks facing off against a few hundred Israeli tanks for several days before significant reinforcements arrived. This battle demonstrated the strategic necessity of Israel’s hold on the Golan Heights, as well as the consequences of over-confidence which Israel felt following the flash victory in 1967.

It was after this battle, where the Arab states saw that even under the best circumstances, a sneak attack coordinated by the combined Arab armies of the region, they could not dislodge the Israelis by force, that the largest Arab nation, Egypt, abandoned any attempts to do so and turned to diplomacy with the Jewish state.

Bental is close to Kibbutz Merom Golan, and can easily be fit into a day in the Golan Heights. Within a five minute drive of the mountain you can visit the Bereshit apple processing factory, and the De Karina chocolate factory with family friendly tours and chocolate making workshops. When you turn off the highway to drive up the mountain you cross a cattle-guard and start up a narrow road. Be careful on the curves because this road is TWO WAY! At the top you’ll arrive at a parking lot where you can leave your vehicle and walk up the last few hundred feet to the viewing point at the top. As you walk up you’ll pass by dozens of sculptures created by a resident of the nearby kibbutz out of the pieces of tanks which were left in the valley after the war.

Also at the top of the mountain is ‘Cafe Annan’ which translates roughly as ‘Coffee in the Clouds.’ It houses a cafe (not kosher certified), bathrooms and a gift shop.

If you’d like to learn more about this or get some help planning your trip to the Golan Heights you can see my Golan Heights tour page, or feel free to get in touch!