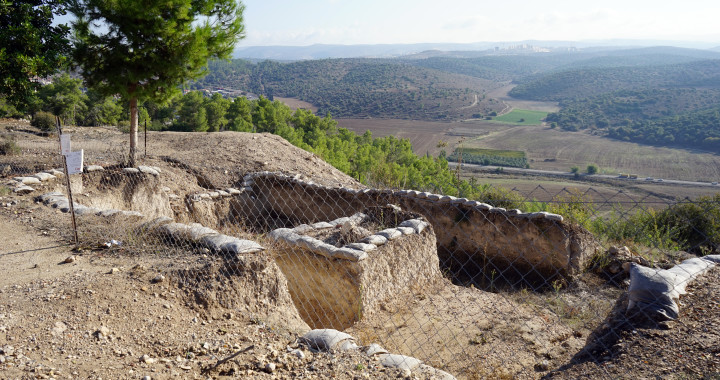 Part of the archeological site at Tel Azekah, with the Elah Valley below

In ancient times before the written word there was a tribe, worshipers of the gods of the land. They walked along footpaths into the hills of the high country between the great sea and the sea of death, where nothing sinks. When they found a hill with sweet water flowing from it they stopped. From the top of the hill they could see far into the distance, so no enemy could surprise them, and they made their camp there. And they found that the valley was fertile for growing seeds, and the forests full of game, and the water flowed even in the summer when there was no rain. Since the place was good and they had no reason to leave, they stayed. Eventually they built permanent buildings; first store houses for crops, then homes, then temples for the gods. Many years later, when they multiplied, and the people became rich, and the lands well tilled, they chose a king; who hired an army and built high walls around the buildings to protect the people, and the storehouses, and the palace.

Until one day the king had a feud with another king, and an army was sent to besiege the town. They dug under the walls and opened the gates. When they entered the town the men were slain, the women and children taken as captives, the buildings burned. Though the walls were made of stone, the roofs were made of wooden beams and the homes full of wood and cloth and other things that burn. The town burned. And over the years the walls crumbled, and all that was left were piles of rubble.

But one day the neighboring kingdom was at war, and a village on another hill was conquered and taken over by a foreign people who worshipped strange gods. And the people from the village fled until they were beyond the reach of the foreigners. They wandered until they found the hill of the burned city with the piles of stones, now half buried in the dust. And they saw that there was water that flowed even in summer, so they quenched their thirst, and they stayed. And they took some of the fallen stones from their piles and used them to build their own homes, along with new stones that they gathered. And they built in the same place, high up the hill overlooking the valley and close to the source of the water that flowed even in summer.

Years passed. Those who had fled died and their children continued to worship their gods and till their fields. And their children after them. Then there was a year with little rain, but they persevered. They bought grain from traders who came from far away, trading animals, cloth, and other treasures for sustenance. But by the fourth year of drought they had used up all their treasures and joined a great flood of people who fled the land of their gods to seek a place where the gods granted rain, and where they would not starve.

They planned to come back, but they found another place far away, and they stayed. Their homes on the hill, with the water that flowed even in the summer, slowly collapsed. The water channels filled with dirt. The fields were taken over by weeds. Until one day another people came from far away, and they found the water flowing from the hill and the fertile fields and the safe place up above the valleys, and they made their camp there, and they stayed, and they built their homes. And they worshipped their gods, and built a temple to Ba’al, and made their offerings. And they had children, who tilled the soil and built high walls and became rich. And a powerful warrior enforced the law of the gods and became king.

Many years later another tribe came from the desert. They were a tribe who did not know Baal or the gods of the land, and they destroyed the city, and knocked down the walls.

As I drive up the hills of Judea from the airport in Tel Aviv, I always try to point out the villages on each hilltop to my clients. There’s a reason they’re all at the same height. Water filters slowly through the porous limestone crust which covers the hills in this area, creating an underground reservoir known as an aquifer. When the water reaches a layer of clay, the tiny clay particles fill with water and expand, creating a water-tight seal called an aquiclude. The water, with no alternative, must seek a way out, and pushes out to the sides through any crevice in the rock until it bursts out onto the surface of the hills.

This valley where highway 1 connects Tel Aviv to Jerusalem used to have Arab villages on the hills overlooking it on both sides. In Israel’s war of independence in 1948 many of the villages laid siege to the road, cutting off water and other supplies from the Jews of Jerusalem. These villages were built on the same places where ancient Roman, Greek, Jewish, Canaanite and paleolithic peoples built their homes, and for the same reasons. And they are no longer there for similar reasons.

When modern archeologists started exploring the holy land under the rule of the Ottoman Turks in the 19th century, they found strange mounds covered in dirt. The lines of these little hills on top of hills seemed unnaturally sharp for the rolling landscape. The sides rose steeply and the tops were strangely flat. They suspected that these hills, which came to be known as tels, were the remains of ancient cities, and when they began to dig this was confirmed. All over the land, from Tel Dan and Megiddo in the north to Tel Arad and Tel Beer Sheva in the south, these scientists unearthed layer upon layer of cities. They found layers of civilization going back thousands of years, often neatly preserved in their own distinct layers like an enormous layer cake with anywhere from two or three to dozens of layers.

When Herzl gave his book describing a Jewish nation that would rise in the Land of Israel a name, he called it “Altneuland,” German for “Old-New Land,” in reference to the rebuilding of the modern Jewish nation in their ancestral homeland. Soon after, when the book was translated into modern Hebrew, the title was translated as “Tel Aviv.” A tel is the remains of many layers of ancient civilization. Aviv, the Hebrew word for ‘Spring,’ represents rebirth and renewal. When the modern Zionists created a new city on the sands of the Mediterranean, intended to be a Hebrew city outside the walls of Old Jaffa, it came to bear the same name.

But a tel is only one way in which history in the Land of Israel is layered. In Jerusalem one finds the distilled essence of this, as the walls themselves cry out the layered nature of the city’s history, peoples, beliefs, architectures, governments, narratives, infrastructure, ways of life for today and visions for the future. The walls of the Old City were destroyed and rebuilt, taken apart and rebuilt, repaired or built-upon so many times one can see the story laid bare with the naked eye. One sees the base layer of the current wall, built upon stones hewn in the time of the Hasmoneans, descendants of the Maccabees. As as your gaze floats upward you see layers from King Herod, the Romans, the Crusaders, and the Ottomans, and each layer has a distinct style. The stones are cut in different shapes and sizes, laid in different patterns, smoothed or left raw. But here and there one will see Hasmonean stones which were picked up and used again in layers above them. The highest layer not only builds upon the older layer, adding to its height and projecting us forward in time. The highest layer also includes elements of the lower layers, incorporating them into themselves, sometimes artfully dispersing them into beautiful patterns.

In the outward face of the Ottoman built Jaffa gate, a pair of round marble columns, likely from the times of Herod, are embedded in the strictly square masonry. The round columns are spaced evenly across one layer, with the round ends sticking out just a bit from the flat face of the wall. The story goes that the architects of this topmost layer of the wall were killed for failing to include David’s tomb inside it, and their tombs are just inside, within site of the wall. The outer face, with the embedded colums, is riddled with bullet holes from the years between 1948 and 1967, when it constituted the Jordanian side of the border with Israel. Today, as one walks in through the gate, they may notice two rusted, metal mezuzahs on the two doors of the gate. These were made from the melted down bullet casings which were removed from the wall after 1967, and now house sacred scrolls which declare the unity of God in the original Hebrew of people who built the bottom layer of wall below.