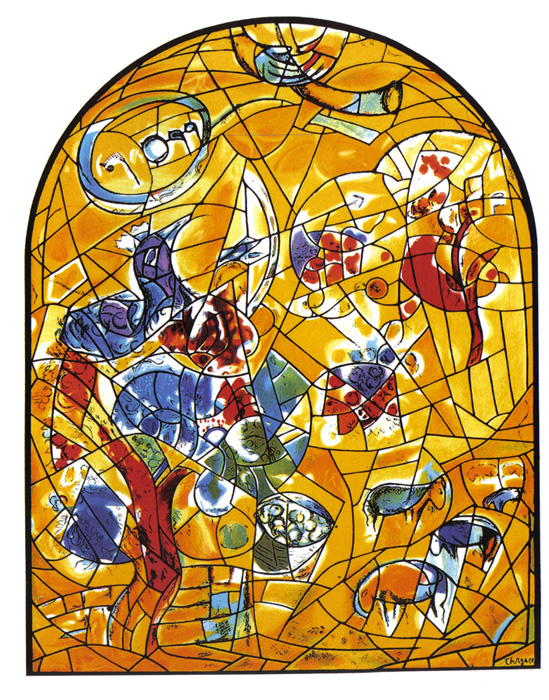 A picture of the 'joseph' stained glass window at Hadassah hospital in Jerusalem. One of twelve in a series housed in the synagogue there, each panel representing one of the sons of Israel.

This week’s parsha, Vayeshev, begins with Joseph, his father’s favorite son, sharing dreams with his brothers. They already hate him for being the favorite, and they don’t take it well,

“Once Joseph had a dream which he told to his brothers; and they hated him even more.” (Genesis 37:5)

As a youth, Joseph has a talent for dreams that foretell the future. He carelessly shares his dreams with people he shouldn’t, or in an insensitive way, and fans the flames against himself. Ironically, it’s the hatred he engenders through sharing the dream of his ascendancy that leads to the dream coming true. Because of their hatred for him they at first resolve to kill him, then compromise on selling him into slavery. He is taken to Egypt where he rises through the ranks, and in a critical moment, his skills as a dreamer, now matured, serve to his advantage. Finally when his brothers arrive (in a later parsha) looking to buy food, they bow before him just as foretold in the original, hated dream.

Joseph had a thing that his mind did as a child, prophetic dreaming. Perhaps a blessing and perhaps a curse. But in either case it was what God had endowed him with. Whether we know it or not, the endowments we receive from God as children determine many of the broad outlines of our lives. As youths we often misuse our God-given talents, traits, and skills, as did Joseph. But even that struggling to master himself was part of the divine plan. How many of us suffered in some way or another growing up, through our own impulsive nature, or prideful behavior borne of natural talent that isolated us, or difficulties using our bodies and living through illness and pain, or traits perceived as weaknesses; only to find that those experiences and traits helped form us into the mature people we are today and now serve us well?

As an adult Joseph wielded his natural talents with skill and tact, and the same trait that he was hated for (perhaps rightly?) as a young man, became the thing that he was revered for and propelled him to the heights of power. And at those heights he was, with Gods help, able to provide a sanctuary for his family and provide sustenance for the growth of the sons of Israel into a nation, feeding on the fat of the land of Egypt to grow and reproduce at a supernatural speed.

May we all be so blessed to turn our challenges and pain into strengths and blessings.