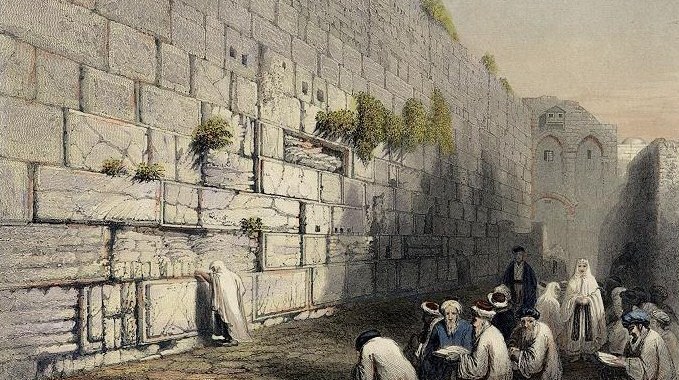 If I forget you, O Jerusalem, may my right hand forget its skill. May my tongue cleave to my palate if I do not remember you, if I do not hold Jerusalem above my highest joy. (Ps. 137:5-6)

The Jewish connection to Jerusalem runs through thousands of years of history, in part because of the Jewish talent for remembering. Each year we dedicate three weeks to mourning for the destruction of the Temple, starting with a ‘half fast’ today and ending with a ‘full fast’ on the 9th of Av.

In 70CE the Roman general (soon to be emperor) Titus destroyed the Second Temple and took the temple treasures back to Jerusalem as depicted on the famous ‘Arch of Titus’ in Rome, and began the great exile of Jews from the Land of Israel, which has only begun to be reversed in modern times.

The Roman emperor Hadrian’s project to rebuild Jerusalem as a pagan city called Aelia Capitolina, may have been the catalyst for the Bar Kochva revolt, where the Jewish people in the land of Israel again rose up against Roman rule. After losing the battle, Jews were barred from the vicinity of Jerusalem by the Romans.

Over time, since Jews could not go up to the Temple Mount for various reasons, an area close to the place of the Temple, a part of the western retaining wall of the Temple Mount, became sanctified by generations of Jewish tears, prayers, and longing.

In 1948, during the war of independence, Israel lost control of the Old City of Jerusalem, and all Jewish inhabitants were expelled by the Jordanian legion. For nearly 20 years Jews could only dream of getting to the Western Wall. Then, in 1967, Israel was miraculously victorious and the Old City fell under Jewish control for the first time in nearly 2,000 years. Whenever I take tourists to the Old City, or my kids for that matter, I make sure to point out how much our ancestors suffering in some frozen hell-hole in Ukraine or Poland would have given to be able to come here. By contrast today, visiting the Old City and the Western Wall is as easy as buying a plane ticket and hopping in a cab.

So why am I still fasting? For one thing the Temple has not been rebuilt. Though in some sense this period of mourning has come to represent sadness over the Jewish people’s loss of sovereignty and rights in our land, it is primarily for the loss of our spiritual center, the holy Temple. As an Orthodox Jew I believe that the Temple will be rebuilt, and that it’s rebuilding will usher in a messianic age of peace for all mankind, serving as the apex of a perfected society. When I look around, I don’t see the peace and perfect compassion I hope to see in the messianic age. So I’m going to keep doing my best, fasting, praying, giving charity, and loving my neighbor, to make it happen. May it come speedily in our days.