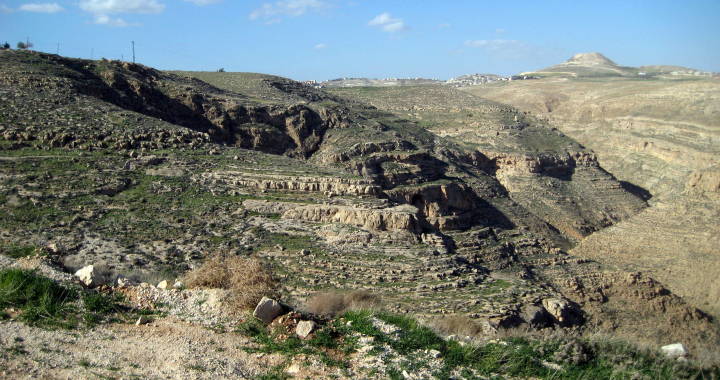 THE ‘OTHER’ GUSH ETZION

Many Israelis and visitors are familiar with Gush Etzion. It’s close to Jerusalem, beautiful, full of Biblical history as well as fun and exciting activities. And all of that is also true of Eastern Gush Etzion, but it’s still a little known gem. Just a ten minute drive from Jerusalem or from Efrat in the main part of Gush Etzion, one drives to the edge of the desert and finds a similar, yet very different, enchanting environment. Here is what one can expect to see on a day tour of Eastern Gush Etzion.

Herodion (more information here) is the main attraction for any day in Eastern Gush Etzion. It is an artificial hill built into a palace by the ego-maniac Herod, then covered over and turned into an enormous funeral mound in his honor. It was also home to fortresses during the Great Revolt of Judea against Rome (64-74CE) and the Bar Kochva Revolt (~135CE). Today one walks up the side of the hill and enters Herods palace, explores the vast water system and underground fortress dug by the rebels, and visits the site of Herod’s burial, as well as enjoying beautiful views of the area, from the dead sea to Jerusalem.

HARITOUN CAVE IN THE TEKOA CANYON

To get to the cave of Haritoun you enter the modern Jewish town of Tekoa. Up the hill is the Arab village by the same name, which lies over the ruins of Biblical Tekoa. This is where the prophet Amos was from, as the first line in Amos proclaims the book to be, “The words of Amos, who was among the herdsmen from Tekoa.” After passing down into the Tekoa Canyon national park, one parks and takes a short hike to the entrance to the cave, passing the ruins of one of the first monasteries in Israel.

The monk Haritoun came to the area in the 5th century as a hermit, eventually attracting many followers and creating the monastery. The cave may have played a part in the formation of the monasteries, as well as serving as a hiding place for Bar Kochva’s warriors, but none of this is known for sure. We do know that the cave is one of the largest in Israel, and I would argue the most un-spoiled by tourist infrastructure. Aside from a few reflective arrows pointing the way, the cave is as nature made it, and you get to (or have to?) get dirty, squirming through on your belly at several points, to get to the end.

Sde Bar started as a ‘youth village,’ which is essentially a school for kids who are struggling in the normal school system. They started a dairy with goats to give the kids something productive to do and help support the place financially. Today the dairy has a nice restaurant and a line of products sold in local stores. They’re covered patio is one of the most beautiful places in Israel to stop for a meal, and everything is delicious, fresh and local.

The horse farm in Tekoa is a small, family run affair, and is unlike riding at any other stable. You aren’t just told to get on a horse and off ya’ go. The owners want you to develop a relationship with the horse, to understand it’s personality, to help groom it a bit and get the saddle on, and learn how to sit well in the saddle before starting your ride. You get a real education, and a real opportunity to connect to the animal as well as the beautiful pastoral landscape.

This boutique winery, located in Tekoa, is run by two French immigrants to Israel. Michelle is happy to share stories and explain in detail how the wine is made, from field to table, and invite groups in for tastings. The wine is exquisite, the company kind and informal, and the setting beautiful. It’s the perfect way to end a day in the area, and he doesn’t mind if you come in smelling like horses. 😉

Please be in touch with us through our CONTACT PAGE, or write me an e-mail with any questions or to book your tour today!