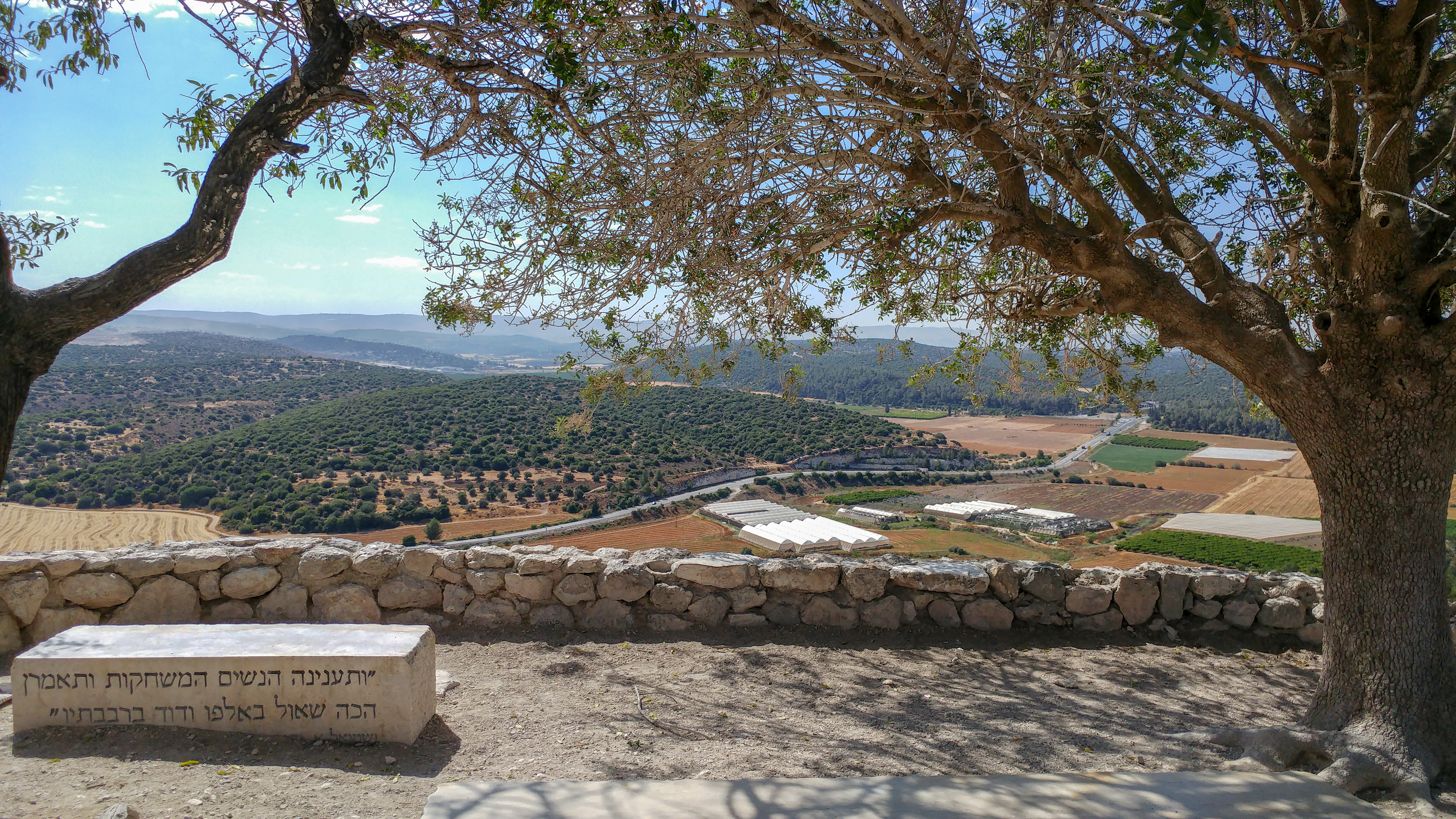 Lay of the Land, The Elah Valley and Tel Azeka

This is the stunning view of the Elah Valley (“the Valley of the Terebinth”), from the top of Tel Azeka. It’s one of the most beautiful and storied vistas in Israel, but the view itself tells you almost nothing about why it matters.

A ‘tel‘ is a manmade hill, built from many layers of civilization piled one on top of the other until finally left desolate and covered over by earth. When early archeologists came to the Holy Land in the 1800s, they found numerous strange hills which did not seem to fit into the landscape. Sure enough when they started to dig they found that these were not geological formations at all, but layer-cake-style troves of archeological treasure. Tel Azeka was the city of ‘Azeka,’ whose destruction by the Assyrians is recounted in the Bible during the reign of king Hezekiah.

From the scenic overlook at the top of the tel one looks down upon the Elah Valley, which wraps around the hill opposite and makes its way up into the hill country of Judah. If one follows this route they would end up in today’s Gush Etzion, and then in Bethlehem.

David was a shepherd boy, shepherding his family flocks in the hills around Bethlehem as his older and seemingly hardier brothers went off to war against the Philistines in the Elah valley about a half day walk away. The scene is described in great geographical detail.

Standing atop Tel Azeka, looking down at the ‘valley of Elah,’ below, we are standing above where the Philistine battle lines were formed, with the Israelites in the valley on the lower slopes of the opposite hill. We can pinpoint the exact location of where the following events took place within a few hundred feet!

A champion of the Philistine forces stepped forward; his name was Goliath of Gath, and he was six cubits and a span tall. He had a bronze helmet on his head, and wore a breastplate of scale armor, a bronze breastplate weighing five thousand shekels… He stopped and called out to the ranks of Israel and he said to them, “Why should you come out to engage in battle? I am the Philistine [champion], and you are Saul’s servants. Choose one of your men and let him come down against me.If he bests me in combat and kills me, we will become your slaves; but if I best him and kill him, you shall be our slaves and serve us.” (I Samuel 17)

Terrified of the giant, no Israelites stepped forward. And the next day the same scenario played out again, ending in deadlock. To understand what happens next one has to know that the ancient Israelite army did not travel with a logistics train. There was no depot sending supplies to the soldiers at the front. The soldiers were called from their homes and villages to come out and fight for a brief period of time, a few hours or maximum a day or two. Each soldier would bring his own supplies from home, including weapons, armor if any, and food. Because of the deadlock on the battlefield David’s brother stayed away longer than expected, so their father Jesse sent the young shepherd boy to bring food to his brothers and find out what was going on.

When David arrives he hears the giant Goliath defaming the people and G-d of Israel and decides he’s just the scrawny teenager to take him down! He approaches Saul, the king of Israel, and declares himself ready to fight. When Saul doubts that this kid can take on the giant David replies,

“Your servant has been tending his father’s sheep, and if a lion or a bear came and carried off an animal from the flock, I would go after it and fight it and rescue it from its mouth. And if it attacked me, I would seize it by the beard and strike it down and kill it. Your servant has killed both lion and bear; and that uncircumcised Philistine shall end up like one of them, for he has defied the ranks of the living God. The LORD,” David went on, “who saved me from lion and bear will also save me from that Philistine.”

Saul tries to put his armor on the youth, but it’s ridiculously huge and cumbersome on him so he takes it off. Instead he goes out to the field of battle with only three smooth stones from the brook (in the middle of the valley) and his slingshot. But the choice of a slingshot is not a strange choice of weapon at all. Before sheep-dogs were domesticated, shepherds used slingshots to direct their animals where they wanted them to go. They needed to be extremely precise with their aim so as to get close enough to scare the animal without hitting and possibly injuring them. David, as a shepherd, would have been highly skilled with a slingshot. The story reaches it’s climax. Note that the word for ‘red’ here is translated, accurately, as ‘ruddy.’ David was not a redhead, but rather sunburned from working outside all day!

David replied to the Philistine, “You come against me with sword and spear and javelin; but I come against you in the name of the LORD of Hosts, the God of the ranks of Israel, whom you have defied. This very day the LORD will deliver you into my hands. I will kill you and cut off your head; and I will give the carcasses of the Philistine camp to the birds of the sky and the beasts of the earth. All the earth shall know that there is a God in Israel. And this whole assembly shall know that the LORD can give victory without sword or spear. For the battle is the LORD’s, and He will deliver you into our hands.”

When the Philistine began to advance toward him again, David quickly ran up to the battle line to face the Philistine. David put his hand into the bag; he took out a stone and slung it. It struck the Philistine in the forehead; the stone sank into his forehead, and he fell face down on the ground.Thus David bested the Philistine with sling and stone; he struck him down and killed him. David had no sword; so David ran up and stood over the Philistine, grasped his sword and pulled it from its sheath; and with it he dispatched him and cut off his head. When the Philistines saw that their warrior was dead, they ran. (I Samuel 17)

The day was won, the yoke of the Philistines thrown off, and the meteoric rise of David begun!

Tel Azekah is included in the tour I do of the Shefelah, AKA. Judean Lowlands. Learn more about it HERE, or contact me today to book your tour!