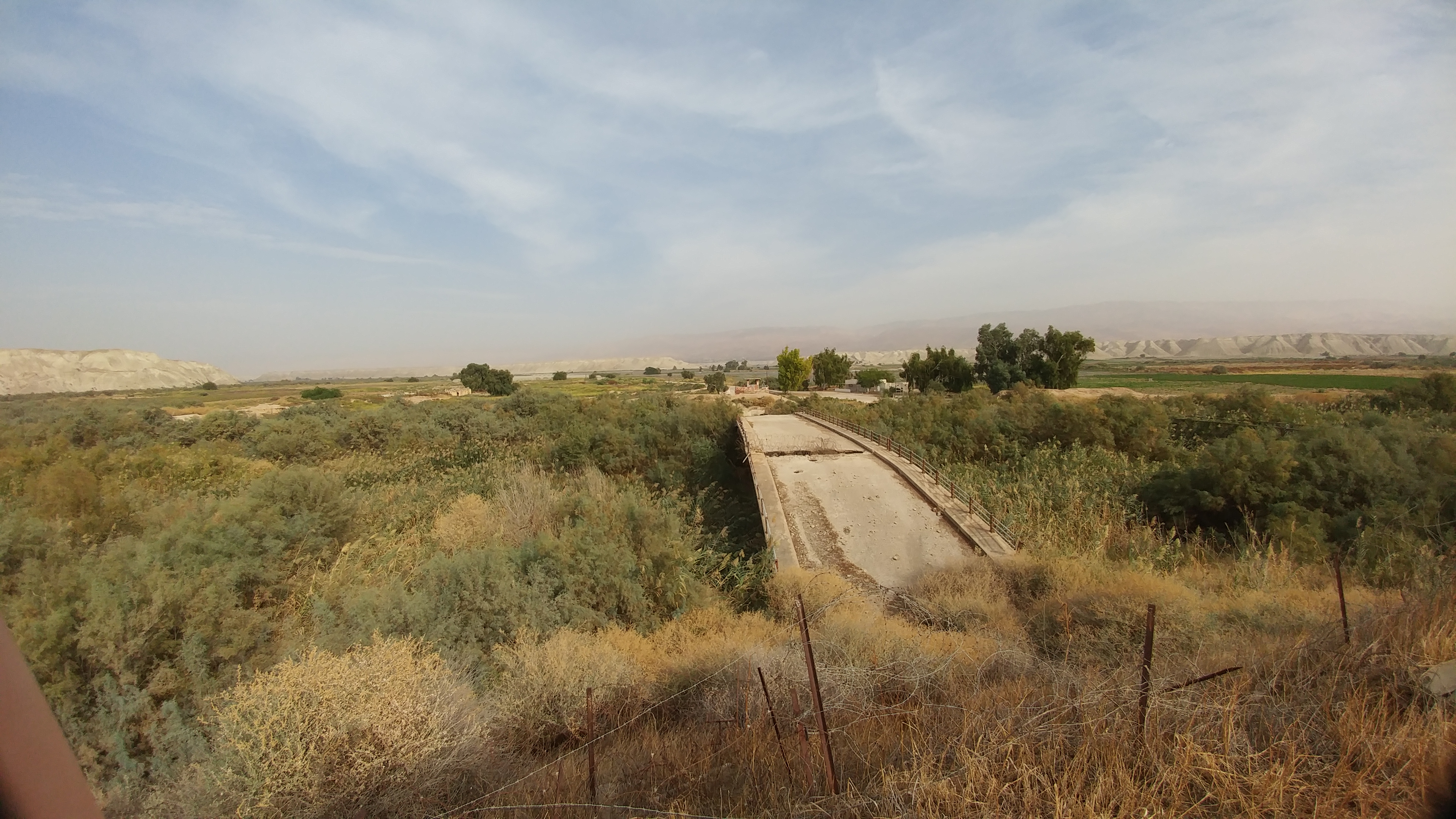 Deep at the bottom of the Jordan valley, the ancient river winds its way back and forth through the plain, making a mockery of the straight line representing the Israel-Jordan border on any map. Not only is the border extremely twisty, more than triple the length of the river from beginning to end ‘as the crow flies,’ but it shifts over time. The peace treaty signed in 1994 between Israel and Jordan fixed the river as the border, and in some places this has required, literally, cementing walls of the river in place to prevent whole swaths of painstakingly cultivated farmland from changing sides.

A short drive North of Jericho along route 90, you turn off the highway, pass between rows of date palms on both sides. Eventually you arrive at the gate to an army encampment. If your guide has arranged entrance with the army ahead of time you will be let in and taken down almost to the water’s edge, where you’ll see an old wreck of a narrow, low, one lane bridge, gated off and ‘protected’ by multiple layers of razor wire. This is the ‘Adam bridge,’ former crossing point between Israel and Jordan (called ‘Damia bridge’ in Arabic, and on Google Maps). From the nearby abandoned army post one can look down and see the bridge that was here during the Ottoman period, and another modern bridge, also now abandoned.

But all these bridges were here, in this same place, for a reason. Across the river, in the mountains of Moab in Jordan, the Yabok river comes down to this place. It’s a convenient place to come down from the high plain which continues on to Damascus, Iraq, and the rest of the ancient Mesopotamian world. On the Israeli side, Nachal Tirzah, the Tirzah river bed, goes up into the Shomron mountains near Shechem.

That same night he arose, and taking his two wives, his two maidservants, and his eleven children, he crossed the ford of the Yabok. After taking them across the stream, he sent across all his possessions. Jacob was left alone. And a man wrestled with him until the break of dawn. When he saw that he had not prevailed against him, he wrenched Jacob’s hip at its socket, so that the socket of his hip was strained as he wrestled with him.

Then he said, “Let me go, for dawn is breaking.”
But he answered, “I will not let you go, unless you bless me.”
Said the other, “What is your name?”
He replied, “Jacob.”
Said he, “Your name shall no longer be Jacob, but Israel, for you have striven with beings divine and human, and have prevailed.”
-Genesis 32:23-29

Here is the place where Jacob crossed from Laban’s house back into the land of his father Isaac after his exile. This is where he received the name, ‘Israel.’ And because of this, and because of the geography, and because the Bible tells us that Abraham comes into the land and then finds himself quickly in Shechem, which is directly up into the hills from this point, it is reasonable to assume this is also where Abraham crossed into the land.

Abram took his wife Sarai and his brother’s son Lot, and all the wealth that they had amassed, and the persons that they had acquired in Haran; and they set out for the land of Canaan. When they arrived in the land of Canaan, Abram passed through the land as far as the site of Shechem, at the terebinth of Moreh. The Canaanites were then in the land.The LORD appeared to Abram and said, “I will assign this land to your offspring.” And he built an altar there to the LORD who had appeared to him.
-Genesis 12:5-7

This is the place where the Jewish story starts, in the fullest sense, by bringing together the proto-people of Israel in the persons of Abraham and Jacob, the proto-Torah of Israel in the special relationship between them and God and the covenant, and the land of Israel, where that relationship is destined to realize its full potential. Here, in this nondescript bend in a small river, deep in the wilderness of the desert an hour drive from Jerusalem on modern highways, is the point of transition from wandering to homecoming, from paganism to monotheism, from personal striving to striving for (and with) God.