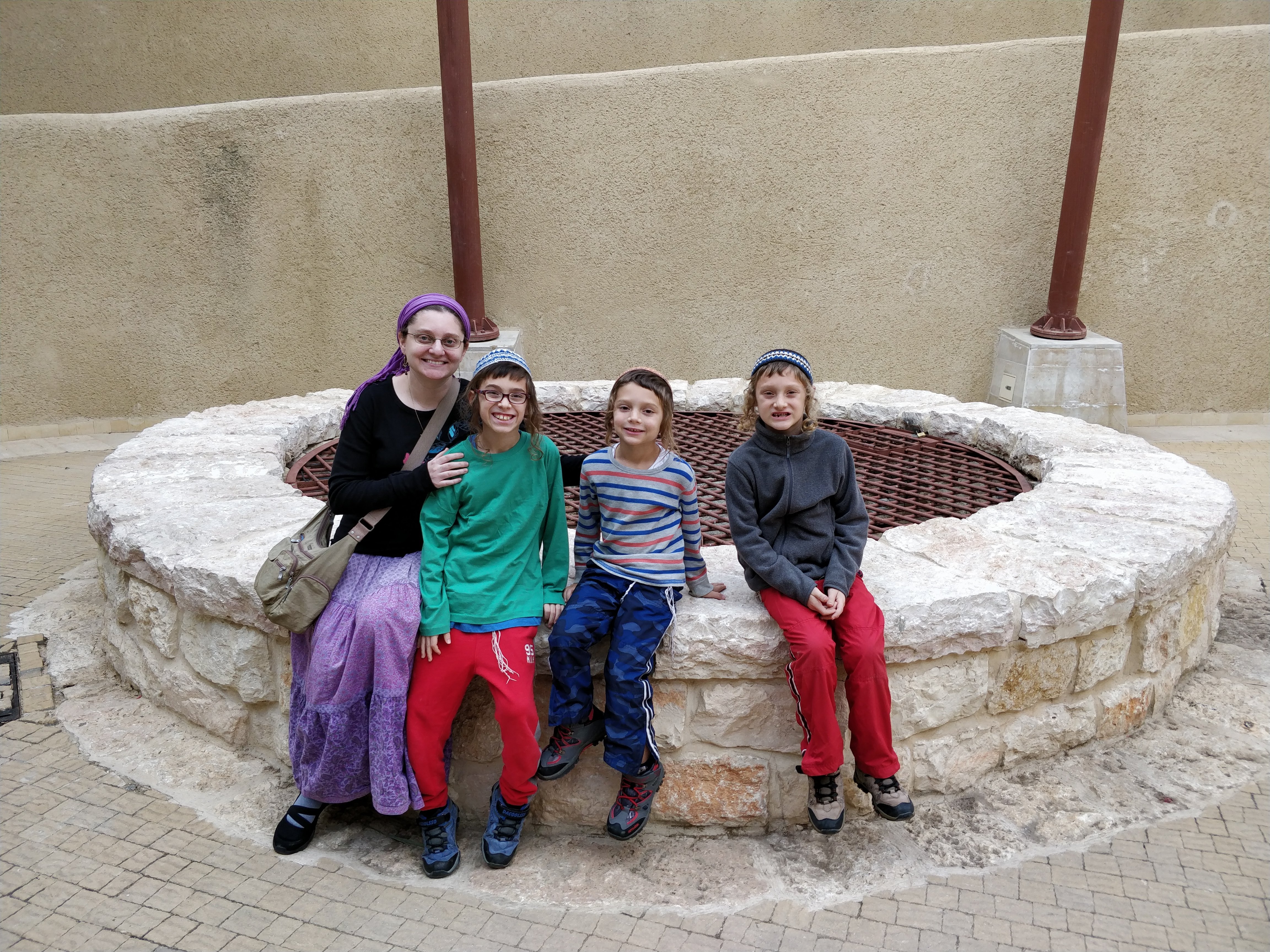 Why yes those are the cutest kids and most beautiful woman around. You can't have them. They're mine! :P

The city of Beer Sheva recently built a magnificent visitor’s center around Abraham’s well, and I highly recommend visiting either on your own or as part of a tour with me. But first a bit of background.

In the book of Genesis Abraham leaves his familiar home in Mesopotamia and follows God’s call to come to, “a land that I will show you.” After entering the future land of Israel and walking through the mountain country which will make up the future kingdom of Israel, one place where he hangs around for a while is at a place which would come to be called ‘Beer Sheva.’ There he digs a well, but soon the shepherds of Avimelech, king of the nearby city of Grar come and take the well from him. When Avimelech shows up and Abraham protests, the dispute is settled by Abraham giving Avimelech 7 sheep, and the two make an oath, a shvua, of peace at that place, giving the rights to the well to Abraham. The word used for the well in this original context is ‘sha’vah’ (oath), thus beer sha’vah (well of the oath), which eventually comes to be called beer sheva (well of the seven).

The site of Abraham’s well was one of the main water sources for the early modern city of Beer Sheva until quite recently, and today you can still see down 8 meters (about 24 feet) to the water.

The site can be visited only as part of an official tour, which must be reserved in advance. The official website with address and phone number can be found HERE. There is plentiful street parking in the area around the visitor’s center. Just drive within a block or two and park.

The tours are given by the local staff of the site, and in my experience have been excellent. The tour begins with a review of several biblical passags having to do with Abraham which are written in giant letters on the wall, then you begin the multimedia part of the tour. The guide leads the group through a darkened room where a voice reads out various relevant verses and lights up those verses on the walls as you make your way up a very easy ramp. In the next room a movie of ‘Abraham’ and his camp are projected on the wall to one side of you, and on the other side the wall is mirrors, so it looks as though you are walking with them. Eventually one arrives at the top, where you are given 3D glasses and invited to watch a roughly 10 minute, very well done film about the life of Abraham. After the movie the screen lifts up and you see the well itself, and can go down to it, look in, etc., as the guide is available for questions.

Many sites in Israel have small films that are part of the visit, and I skip many of them as being either too corny, low quality, or giving a message I don’t want as part of my tour, but the film at Abraham’s well is very well done and communicates positive values for kids, and for adults as well. I recommend the site to anyone traveling on their own, especially with children, or as part of a Negev tour with yours truly. 😉